This is the original Kinnaird home in the Carse of Gowrie, near present day Kinnaird. Kinnaird is a parish, in the county of Perth; containing, with the hamlets of Craigdallie, Flawcraig, Nethermains, and Pitmiddie. The hamlet of Kinnaird is four miles (NW) from Errol. The Parish is nearly three miles long and two broad, and contains above 3000 acres. It Is situated half way between Perth and Dundee, and has a fine south-eastern exposure, looking down on the Carse of Gowrie, part of which is contained within its bounds. Kinnaird has the parish of Collace on the north- west, the parishes of Errol and Inchture on the south- east, Abernyte on the north-east, and Kilspindie on the south-west. Some of the higher grounds command extensive views, especially of the Highland mountains.

The land which is included in the Carse, though small in extent, is the richest part of the parish, the soil being a fertile black clayey earth. On the south side of the braes skirting the Carse, the land, though good, is inferior to the former, and chiefly a stringent binding earth; on the north side the soil is light and shallow, and covered for the most part with bent and heath, intermixed occasionally with natural pasture. About 1550 acres are under tillage; and 1500 are uncultivated, consisting principally of moor ground, pastured with Highland sheep in the winter, and at other times with oxen. Green crops are cultivated; but grain is the chief produce of the arable land, most of which is capable of yielding whcat, in general of very good quality. Live stock are but little attended to. The husbandry is excellent; and improvements, commenced here at an early period, have been ever since gradually advancing. The parish is entirely agricultural. The chief communication of the people is with Perth and Dundee, the road between which places passes within half a mile; and there is a port on the Tay, about four miles off.  The higher and lower parts of the parish have been connected by a new road, that forms a kind of thoroughfare between Strathmore and the Carse of Gowrie. Ecclesiastically the parish is within the bounds of the presbytery of Dundee, synod of Angus and Mearns; patron, the Crown.  The only relic of antiquity is the ruin of the ancient castle, erected in feudal times, with massive walls, and strong stone arches under the floors, and evidently intended as a place of defence as well as residence.

Kinnaird Castle, not to be confused with the much larger seat of that name in Angus, is much more in evidence here than is usual, not hidden away in any large wooded estate but soaring impressively on an open green knoll above the village, still occupied and in good order. It is an interesting and dramatic place, a tall, red-stone keep of the 15th century with earlier nucleus, thick-walled, with a small projecting tower or buttress at one corner, which is not a stair-tower, as it seems, and highly unusual, its summit forming a watch-chamber at high parapet level.

Another unusual feature is the two-storeyed 17th century addition to the east-for this is not actually attached to the keep. It contains an old kitchen with an enormous arched fireplace 13 feet wide by 6 deep, with an outside service window, evidently for viands to be pushed through for the castle's family. Hot dishes cannot have been a speciality at Kinnaird.

The Kinnairds moved to live at Moncur Castle, nearer Inchture (now itself a ruin and abandoned by them for Rossie Priory in the vicinity). When this occured is not clear. Sir Patrick Threipland, 1st Baronet of Fingask, bought Kinnaird in the 17th century. Just beforehand, in 1617, James VI on a rare return visit to Scotland, spent some days hunting from here. Later the castle became ruinous, but happily was restored towards the close of the last century. 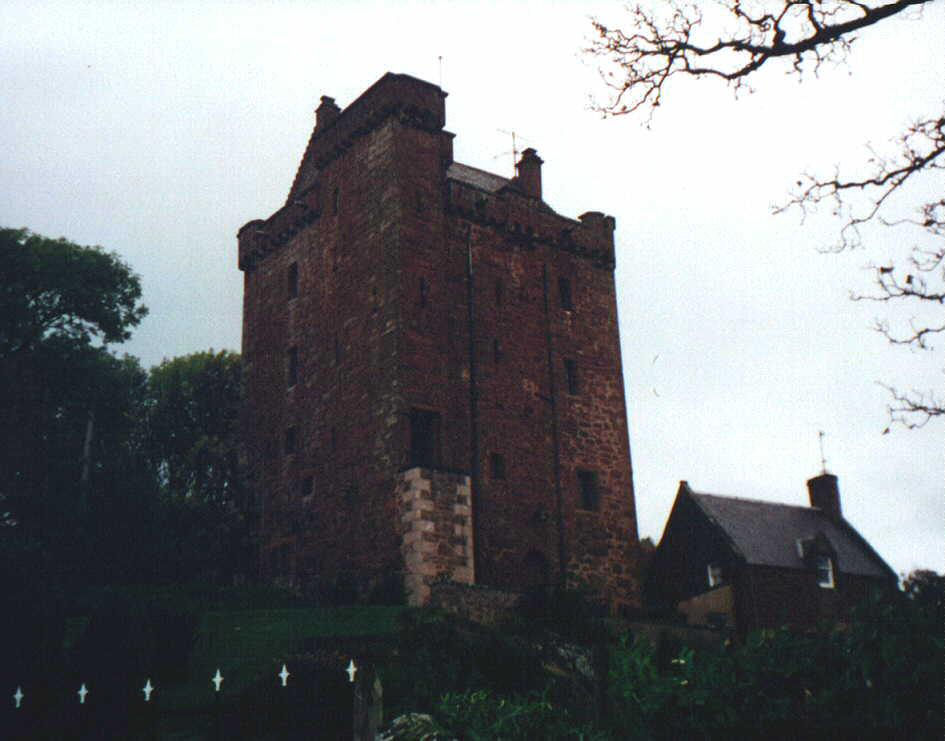 Kinnaird Castle tower (photo provided by Dominic  Magliocco, some of the information below was supplied by the present owner of Kinnaird Castle, Dr. J. Hand).

Kinnaird was built as a frontier castle to protect the Carse of Gowrie and its people against the Highlanders. It is a royal castle and is reputed to have been built in1107 (some archeologists think that it is older.

The Kinnaird family lived in the castle from the mid-twelfth century. In 1449, due to a misunderstanding between two hot-tempered Scots (involving the death of a member of the Douglas Clan), Kinnaird was besieged by the Douglas Clan, who managed to break in, loot and wreck the castle. Most of the castle had to be rebuilt in 1450. A lot of the castle fabric today dates from 1450. The basement area dates back to earlier periods.

John Kinnaird of that ilk (15th Laird of Kinnaird) was obliged to sell the family estates of Kinnaird. He resigned the lands and barony of Kinnaird into the hands of the King (James I & VI), who, on 26th March 1618, granted them to John Livingston (a Gentleman of the Kings Bedchamber). The castle passed to the Colvilles, who in turn, passed it to the Threipland family in 1674. After some years of occupancy, Kinnaird was abandoned. In 1854, three ladies took pity on the derelict castle and spent a fortune in repairs. In due course, the place was again bought by the Threiplands, who sold it to the present owner, Dr. J.Hand. 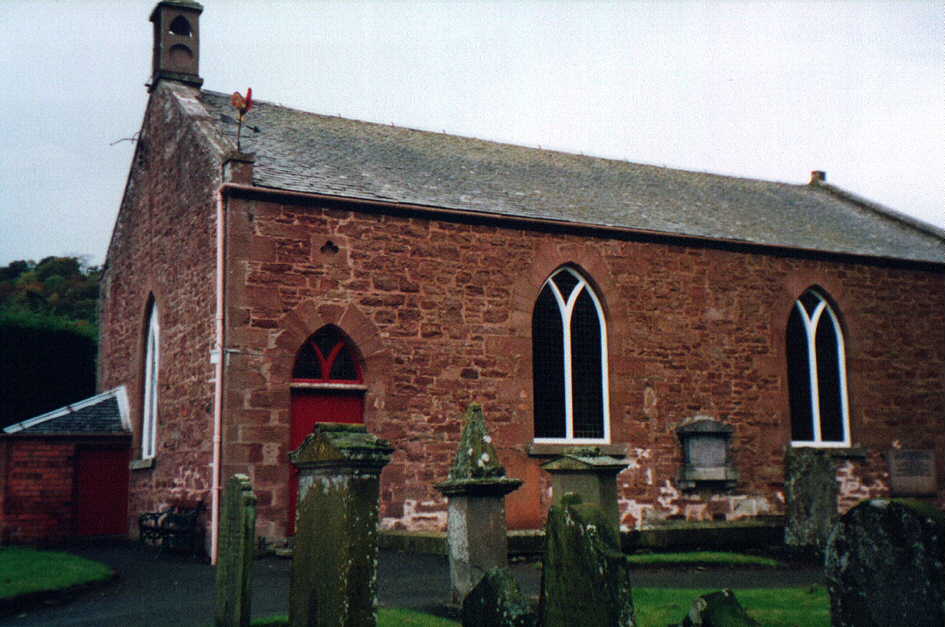